On April 12, we held the long-awaited (at least, for me) 2nd birthday party for my little toddler. Here is a recap of how it went and what I did. I’m not including pictures of everything, just the DIY items.

Here is Nadia wearing her fabric/tulle tutu and applique tee I made her. She is also wearing her Minnie Mouse ears. Every child got a set to wear. The tutorial for them is here.

The next two pictures show how the centerpieces from this tutorial were used. I put them on the two 8′ tables I pushed together, as well as on the mouse ears/bubbles table. 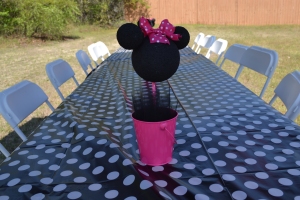 In the previous picture, I used this tutorial from a blog called Crackers and Carrots as a guide to make the info poster. It now hangs on her bedroom wall. The original does have our last name on it, but I edited it out for privacy purposes.

I made these goodie bags (with a little help on assembly from my Mom) for each kid guest. They were very easy and fast to make (sorry, no tutorial). They were filled with age-appropriate gifts since we had several ages present. I used things like: crayons, Play -Doh, stickers, baby board books, jump ropes, sunglasses, ball and paddles, pencils, Rubik’s cube, etc. All were Mickey/Minnie theme with the exception of the Play-Doh, and were found at Party City, Michael’s, and Target.

The back had the following sticker, found from this shop on Etsy.

Next up is one of my favorite touches from the party: the food signs! I used this tutorial from Laurel Lane crafts to get myself started. 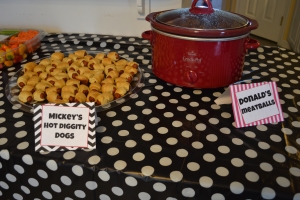 Nadia LOVED the dipped cookies! She kept sneaking away to get them.

A friend made this cake, but it was so adorable, I had to share!

Oh, and here is a family shot with Hubby and I wearing the Mickey and Minnie Mouse pocket tees I embroidered that morning along with the birthday girl. His tee came with the pocket, but I made mine from a fabric quarter I bought at Hobby Lobby:

I think that pretty much covers all of the DIY projects for the party. Simple, but full of pink, black, and white. Baby girl and her guests had a blast, and I was really happy with how it all turned out! Thanks for reading! Which was your favorite? Have any questions? Leave a comment below! 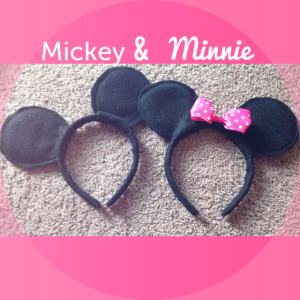 Last week, I finally sat down to begin working on these Minnie and Mickey Mouse ears for my daughter’s 2nd birthday party in April. Below, I describe how I got to work on creating them. I started out with everything you see in this picture. The 8 packs of headbands had 3 in each pack and were $1 each at Dollar Tree.  I found the sticky back foam, ribbon, and glue sticks at Joann, and the felt at Walmart (made from post-consumer recycled plastic bottles). There was only a yard and a half in stock, so I got all of it. *note: Anytime you want to shop at Joann, Michaels, Hobby Lobby, etc. bring coupons!!!!! Joann has an app, emails you coupons, and will mail them to your home. Michaels emails and texts coupons to you, and every time you shop at Hobby Lobby, you can either print a 40% off coupon and bring it in, or pull it up on your smart phone. It’s too easy to save additional $$ on your purchases at these stores. Take advantage! 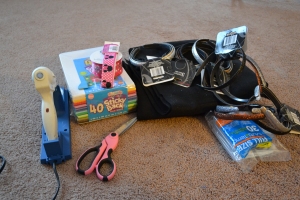 I referenced The Surburban Mom’s tutorial for making the ears, but you will see some differences, as I will point out later. I found a template for the ears on the site, which helped take some of the guesswork away. To start, I measured the headband by loosely wrapping it in the felt to determine what size the pieces of felt needed to be. Then, I went ahead and cut all the strips of felt I needed. 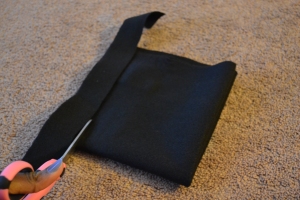 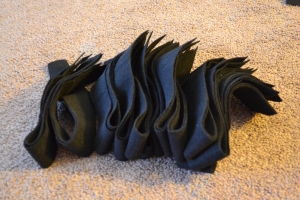 To cover the headbands, I took a strip of felt and placed a little bit of hot glue at the end. I rolled the headband along the strip, adding more hot glue as I went.

Then, I folded one side of the felt across the inside of the headband and glued in place. As expected, the glue was very hot, and “ouch!” was uttered plenty of times. After securing the first side, I overlapped the remaining side and glued in place. The first few I did had more visible glue than I really cared for, but the more I made, the better they looked. Once the felt was secured, I trimmed the excess off of the ends, squeezed just a drop on the inside of the ends, and pinched them together. I repeated until I had this nice stack of felt-covered headbands:

It was then time to cut the foam for the ears. I used the template referenced above to get the right size. I was able to fit 6 circles on each piece of foam. 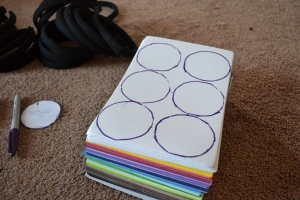 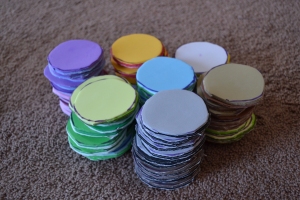 Since I bought sticky back foam, I peeled the paper off of the backs and stuck the two circles together. Note: you only need to take the paper off of one of the circles at this point to stick them together. You’ll remove the other piece of paper when you place them on the felt. Now that the circles were cut, there was one last thing to cut in bulk: the felt covering for the ears. Also found on the previously mentioned website, I used a template to trace the shape (use fabric chalk) onto the felt and cut. And cut. And cut. (In case you haven’t noticed, there’s a lot of cutting that goes into this project!) 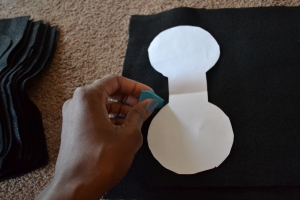 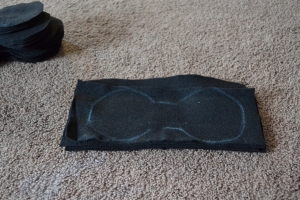 This is where you will want to remove the remaining piece of paper from your stuck-together foam circles and place them on one side of the cutout felt. The tutorial I found called for more hot glue, but I was all glued out at this point and figured it couldn’t hurt to try and sew it. I’m so glad I did! I spared my fingers from further pain, and I think they look much cleaner than they would if I were to glue them. 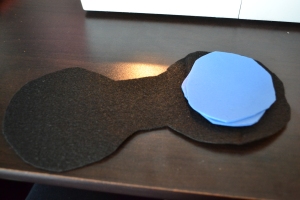 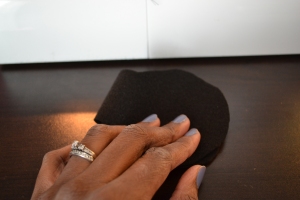 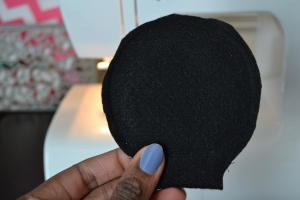 Whether you glue or sew, make sure you leave enough room at the fold to slide the ear onto the headband. 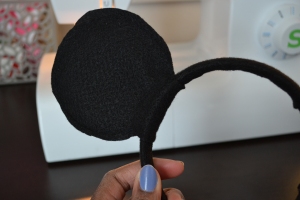 For the Minnie bow, I cut a few inches of this wired ribbon (use whatever color you need). I overlapped the ends and pinched in the middle. I cut a small piece to wrap around the middle and tied off. Hot glue it to the middle of the headband, and you have your Minnie Mouse headband!

Next blog: 3rd Friday of February. Topic: Minnie Mouse centerpieces. Be sure to check out the other posts, including the post where I share how I planned and budgeted the whole party before I spent a dime! Thanks for reading! 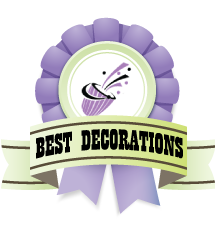